As with all good products, the original Muller’s cart was created out of a need for something better. 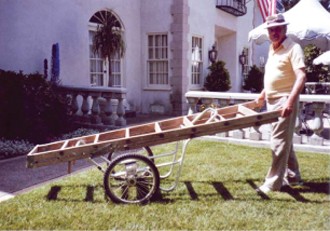 In 1975, Brigadier General Henry Muller of Santa Barbara, California had a problem. His 60 year old wife was unable to manage a wheelbarrow in their stable without it tilting and causing her back pain. Because he knew how much his wife loved her stable work, Henry Muller designed and created the first easy- to-use, lightweight, durable and well balanced stable cart on the market. He patented his new product as “The Muller’s Stablemate” and began to sell it to local stables and ranches.

It’s still made in the USA although now after several changes in the company identity it is called “Muller’s Smart Carts™”. General Muller’s original design remains practically unchanged and has shown time and again its ability to withstand heavy use for decades with little or no need for maintainance.

Now in the UK 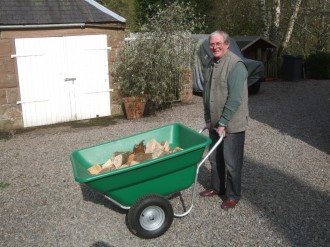 David Fortune has had a Smart Cart for two years and loves it. Here he is (see picture left) with a load of logs which would normally have filled four conventional garden wheel barrows and expended a lot of puff. Now it’s a doddle. Pull don’t push is the secret.

Recently, seeing his aged mother’s gardener struggling to dispose of the grass cuttings from immense lawns he decided to buy her a Smart Cart to ease her man’s labours.

But, he discovered they were no longer available in the UK. So he ordered one directly from Maine. The gardener is camera shy but ecstatic!

David decided that such a good product should be readily available in the UK and offered to represent Smart Carts™ here. Smart Carts™ UK is the result.